In recent years, the metropolitan city of Venice has made strategic investments to update the technology of the underpasses it manages. The companies in charge of technological implementation have identified Seneca, an Italian high-tech company with thirty years of experience in the production of data acquisition, interface and control systems, as their partner. Seven municipalities are involved: Mira, Salzano, Quarto d'Altino, Musile di Piave, San Donà di Piave, and others will be added. The Seneca solution, in addition to supervising the correct functioning of the electromechanical equipment through special sensors, is able to manage the operating status of the pumps and accurately detect the water level, the status of traffic lights and generators and, in the near future, will also detect signals from IP surveillance cameras that can be integrated via VPN (Virtual Private Network). It also manages the sending of notification alerts to operating personnel and the consequent filing of the same for consultation and audit. 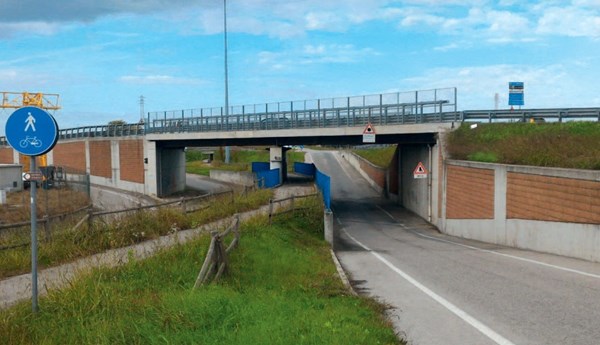 Road underpass 'Salmasi' in the municipality of Musile di Piave, along the SP44 'Caposile-Musile'.

Technological evolution
Before the implementation of the current system, the underpass controls were carried out with the help of operators who physically had to go to the plant and perform the expected checks. In the 1990s, a basic manual type of control was replaced by the use of telephone dialers to relaunch alarms to fixed telephone numbers. In the 2000s the first integrated Tele controls with diﬀerenziata alarms and Scada systems were introduced. More recently, the innovation pursued by the Metropolitan City of Venice, thanks also to Seneca technology, has seen the implementation of a system of remote management and local/remote control.

The functions made available to the system include the detection of level probes, based on which to decide the logic of starting or stopping a pump, and the management of the number of pumps that can operate simultaneously, both under mains supply and with the generator set. All this is the result of an extremely accurate project, the result of the knowledge and experience of the various subjects involved: the technical managers of the lifting plants of the Metropolitan City of Venice, the maintenance companies and the technological supplier Seneca.

The new control panels for the underpass management systems have been designed safely and redundantly, so that, if the remote control system were prevented from managing the start of the pumps due to any anomaly, the electromechanical system with the floats would automatically come into operation. In practice, it is as if each control panel had a double system management system. 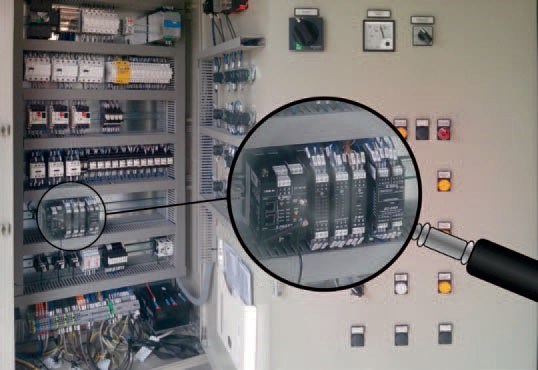 Example of a control panel for underpasses with SENECA hardware and electromechanical redundancies.

The solution implemented in Venice
The heart of the Seneca solution is Z-PASS2-S, a perfect combination of the world of remote control and the world of automation. It is an all-in-one RTU that concentrates I/O, control logic and communication system in a single platform, based on the IEC 61131 programming standard (Straton) with Ethernet/3G+ router and support for secure communication via VPN. Thanks to its numerous communication interfaces, the unit ensures high levels of connectivity with full support for industrial (Modbus RTU, Modbus TCP/IP) and ICT (HTTP, https, FTP, Smtp) protocols. The control logic implemented includes the management of lifting pumps based on the analog/digital levels detected in the underpasses, the operation of traffic lights in case of flooding, the generator set in case of power failure, and the management of emergency procedures.

The system also collects statistics on working hours and the number of pumps starts to adjust predictive maintenance plans. The rotational start-up of the pumps oﬀre has the advantage of evening outwear and tear with a relative lengthening of maintenance operations. In addition to the Z-PASS2-S remote controller, each peripheral has several Z-PC Series Modbus I/O modules, capable of handling up to 34 digital inputs, ten digital outputs, and eight analog inputs. In terms of integration with other electrical and electromechanical components, such as pumps, sensors, traffic lights, generators, present in the underpasses, the Seneca solution ensures maximum continuity and interoperability, as the remote control system ensures continuity of service and maximum integration even in existing installations. In any case, as far as a field operation is concerned, the Seneca system has been designed in such a way that any operator can read the plant data. 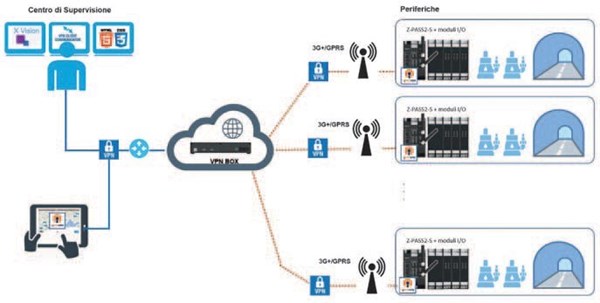 For support activities, the maintenance company turns directly to SENECA, which provides qualified technicians and specific know-how. However, it should be stressed that the system does not require complex maintenance plans, as the system as a whole has been designed and implemented to operate in a way that ensures aﬃdabile with field operations reduced to a minimum.

Communication and supervision
The supervision application has been realized with an innovative SCADA, which uses the graphical interface Html5 and other technologies made available by Microsoft client, server and embedded operating systems. The web solution integrated with Seneca hardware relies on Internet Information Service and other standard technologies, such as SVG and JavaScript. The setting and display parameters accessible from the video pages for each installation include the number of pump starts, pause and working times, flow rates, electrical consumption, commands, and operating states, the status of the traffic lights and generator set and level measurement. The same parameters are associated with alarm events and dynamic trends.

Alarm management includes the acquisition, archiving, recognition and sending of text messages to maintainers, callers, and administrators. The implementation of a 'patrol system' is decidedly useful, which allows ﬂessibile alarms to be managed with the possibility of scheduling the sequence of operators reached if some of them are not available. The SCADA application is accessible via VPN Client Communicator. In essence, Seneca provides on each client, desktop or mobile, a VPN network access tool coordinated by the centralized VPN BOX server. All this means that it is possible to monitor a given underpass (client) in real-time, checking whether it is connected or not to the network and, therefore, whether it is in any state of maintenance or anomaly. 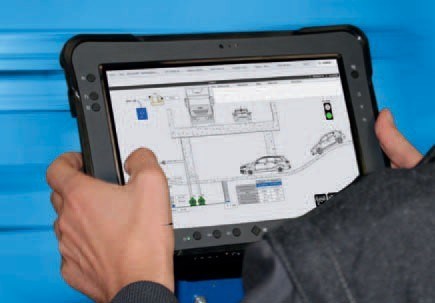 The benefits obtained
The goods brought by the Seneca remote management system are of three types: technological, for users, for the managing body. The first includes the functions of continuous monitoring of the systems, real-time and mobile access, high levels of security and data protection with VPN technology, user recognition, extensive use of web servers with the relative ease of access. For city users, at traﬃco and motorists the system oﬀre higher security standards, as each plant is constantly monitored. Each site is monitored every 30 seconds and in the event of a fault, an alarm is triggered immediately.

Finally, the Seneca solution allows the operator to know the status of the systems and to understand at any time if there are problems, providing support for decisions in critical situations. Knowing at what time the traffic light indicating the flooding of the underpass was switched on or off, and therefore the ban on transit is also essential in the case of investigations and legal disputes. The system also makes it possible to verify the execution of the pump rotation plan at eﬀettiva. There are also benefits in terms of preventive controls. In 50% of cases, anomalies are detected before they occur, for example, if a pump shows a high absorption compared to its power, the maintenance technician intervenes before irreversible damage occurs.

With a simple contact installed on the doors of the technical room, it is possible to control any unauthorized access, as well as supervise the activities of the maintenance company, or verify on another entrance if the buffer batteries of the traffic light system are discharged. From 2015 to 2017, all the underpasses managed by the Metropolitan City of Venice saw a significant reduction in emergency operations, with a total of only 18 emergency operations in 2017, with a drastic reduction in travel costs for the various sites.