In Pontelagoscuro Ferrara (Italy), there is an imposing drinking water plant, capable of ensuring an average flow rate of about 1,000 L/s for the benefit of about 250,000 inhabitants. The main source of freshwater treated is the river Po. The water is collected by the river by electric pumps and sent to the treatment plants.
One of the main processes in the surface water treatment process is sand filtration. A filter consists of a layer of grit through which the water passes. The filters retain the solid particles that have not been deposited during the previous treatment phases, with consequent accumulation in the filter layer. For this reason, it is essential to cyclically remove the retained material through a 'counter washing' of the filter before reaching the saturation of the filter layer through the insufflation of compressed air and the entry of clean water at predetermined intervals of time and subsequent removal of the resulting water.

The objective of obtaining a new and more efficient way of programming and automating the washing phases of sand filters has prompted Hera's management to look for an advanced solution and to find it in Seneca's Made in Italy technology, a company that has been operating for over 25 years in the field of automation, data acquisition and remote control. Filtration tanks in the washing phase

A new concept in filter washing
The automation project for the washing of sand filters was developed on the basis of a relatively simple but highly effective idea: that of creating by technological means a sort of 'virtual conductor' which independently, on the basis of programming, carries out the normal washing activities usually carried out manually by the operators. The project was developed by Vittorio Crepaldi, by Hera's drinking water management technicians, with the help of Seneca's technical support. Hera staff and Seneca engineering staff participated in the field implementation for software development.

The benefits and savings achieved by the system, whose return on investment has been expected in 3-4 years, have been many: greater reliability of the washing phases, optimization of the activities of the management staff, possibility to perform washing at predefined times (for example at times of lower impact plant) and in time slots with lower energy costs. Hera has therefore fully satisfied the expectation of an even distribution of washing activities throughout the day, which in turn translates into the delivery of more efficient service and a higher quality product to users. 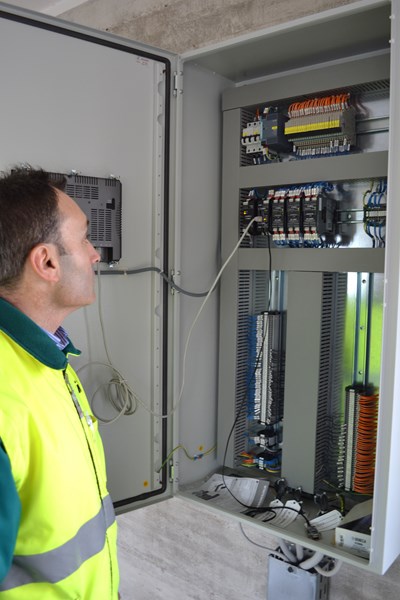 The SENECA automation and data transmission system
The implementation of the Seneca system in the context of the drinking water plant involved the control of sand filtration batteries, horizontal pumps, compressors, and pneumatic and electric valves. In total, more than 240 digital signals (160 inputs, 80 outputs) are managed. The automation and remote control system consists of a multifunction web server controller Seneca Z-TWS4 equipped with operator panel from which to set the washing modes. Each of the 5 filter batteries is equipped with remote control stations based on Seneca mixed I/O modules (ZC-16DI-8DO) and connected to the central system via Seneca Z-AIR radio modem (6-channel antenna licensed free at 868 -870 MHz).

The overall installation thus results in a reliable and high-performance Wi-Fi system. The wireless communication system with Z-AIR equipment is one of the key elements of the system. The possibility of eliminating cables and replacing them with radio modems has allowed the operator to centralize the numerous signals coming from different and distant points in the system, drastically reducing the costs for wiring, masonry, and mechanical interventions. At the same time, the use of Z-AIR radio equipment has made it possible to reach areas that are difficult to access and, thanks to the IP65 level of protection, to install the system in harsh outdoor environments; in short, a centralized and sequential automatic system has been created from which plant operators can program the automatic filter washing rate, setting the date and time of washing of a single daily filter for each of the 5 filter batteries present on the operator panel.

The Central Station provides a conversation with all the remote washing systems inside the Pontelagoscuro Potabilization Plant. In addition to being equipped with web server functions, the Z-TWS4 control hardware is extremely powerful and versatile, as it is optimized both for Energy Management applications (with support for IEC 60870-5-101, IEC 60870-5-104, IEC 61850 protocols) and for plant automation (thanks to the IEC 61131-3 - Straton Soft PLC). The central station also includes a supervision operator panel and some high density I/O modules (ZC-24DI and ZC-24DO) with ModBUS/CANopen switching protocol. Control logic
To better understand the automatic washing process, it is interesting to delve into the control logic. For each filter, there are 3 input contacts that characterize the operating status (operation, washing, exclusion). The exclusion contact is managed by a selector and can be operated by a field operator. For each filter, there is also an output contact used for selection before washing. For each filtration battery, there are also 2 output contacts, one for zeroing, the other for washing started. Washing starts according to a three-step procedure: 1) zeroing (closing of the first contact), 2) selection of the filter on which to wash (closing of the relative contact), 3) starting (closing of the starting contact). All three steps have a duration of 5 seconds, even if the set time is not binding in itself. A high-level digital input is present in the central panel (where the CPU is located). When it is active, it prevents any washing from starting. If the alarm appears when a flush is in progress, no operation is allowed.

HMI
For each set of filters, through HMI (Human Machine Interface) consisting of a 5.7" LCD touchscreen terminal, an operator can configure the washing cycle by intervening on parameters such as the activation of the filter washing automatism, the starting time of the washing, the selection of the first filter with which to start the cycle. The times cannot be the same for the various batteries. If they overlap, it is necessary to wait for the completion of the washing in progress before starting the next cycle. The washing cycle lasts about half an hour. The operator panel is therefore divided into a system access page and a menu page from which the filter batteries are selected. For each battery, the general button for enabling or disabling the automatic system, the washing start time, the filter to be washed and the enabling status of each individual filter can be set. The HMI system is completed by a page for setting the current PLC/HMI date/time and the high-level alarm signal.