With the adoption of the remote control system based on SENECA technologies and on the Siemens WinCC OA SCADA, Alto Trevigiano Servizi has created part of its automated infrastructure for the remote management of the production and distribution plants of the integrated water service (SII) with the aim of optimizing the use of resources and constantly improve the quality of service, equipping the plants with both local and distributed intelligence.

The Schievenin valley in Quero Vas (Belluno - Italy) represents one of the typical hilly situations of the territory managed by Alto Trevigiano Servizi. The choreography of these places, the dispersion of the inhabited area, of the water sources and of the relative collection and distribution systems has led to the design of a remote control system with integrated antenna radio modem operating on a free use band.

For the Schievenin area, the most complex and ramified, the PLCs installed to manage all the substations on the RS485 bus connected via radio modem and is interconnected to the Scada with the use of the Modbus TCP protocol encapsulated in a VPN (Virtual Private Network).

Fig.1 Map of the Schievenin valley with geolocation of the radio modems

With the IEC 61131 development environment, the ZPASS2-S PLC has been programmed with specific routines for the management of water meters for the metering and historicization of consumption, management of relays for the loading of remote tanks, management of rain gauges, management of chlorination systems, acquisition of measurements and communication with the SCADA.

Each peripheral is based on Seneca I/O modules for collecting signals from the field, on the VPN server and on the Z-PASS2-S controller, a sofPLC IEC 61131 (Straton) for remote diagnostics and maintenance operations on the plants. The unit also performs lifting control logic based on level measurements (analog or from floats) with the management of up to 4 pumps per peripheral station. The Z-PASS2-S units are also used as an energy monitoring gateway for measurements taken by electrical measuring instruments.

The plant communication is developed partly via 3G+/GPRS network, supported by the modems integrated into the Z-PASS2-S controllers, and partly via UHF 869 MHz and NBMF 169.4 MHz radio, thanks to Seneca Z-AIR radio modems operating at free frequencies. The Z-PASS2-S controller also supports the IEC 60870-5-104 protocol, thus standardizing data transmission between certain peripherals and the supervision center. 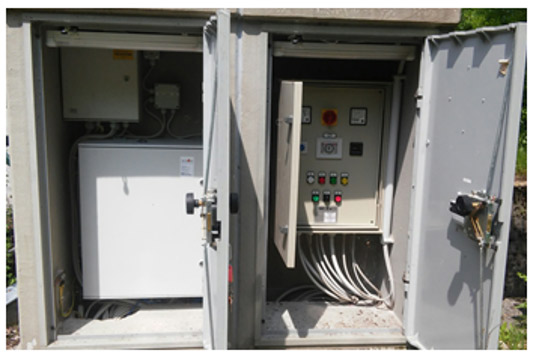